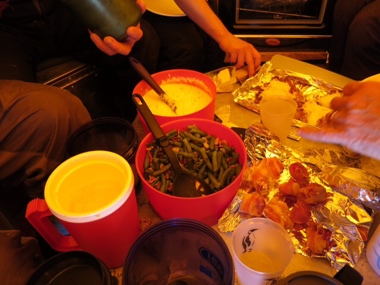 We have received word that our so-called “flying traverse” camp move to our south Miller Range field site may happen as soon as tomorrow. A flying traverse is when we pack as much as we can on to the sledges we can tow behind our skidoos and then the rest of our gear is packed on to the Basler, and then we move all of it and us to the new campsite. This will be a multi-stage endeavor with many moving parts. First, we’ll need to prepare a runway for the Basler at the new site. To do this, we’ll have a Twin Otter (yet another airframe) drop our skidoo-towed runway groomer at the new campsite. Then a four-person team will traverse with some gear to the site and get the runway in order by towing the groomer behind the skidoos. As that’s happening, the other four-person team still at the original campsite will continue breaking down camp into cargo to be hauled via skidoo-sledge and stuff to be taken by the Basler. Once the Basler arrives, they’ll load up the plane, which will head to the new site while the remaining four-person team starts their traverse. Ideally this might only take ~2 days, but it could easily be delayed for a variety of reasons at any stage. We’ll get confirmation tomorrow morning for the Otter flight–keep you posted on out plans!

In the meantime, I thought I’d elaborate a bit on our epic Christmas celebration. Since we were so busy having fun last night, we didn’t have time to say much about our awesome Christmas feast in our last post. The spread was impressive, all the more so because it was all prepared in tents over camping stoves or in our small camp oven. It should be noted that there was bacon present in the vast majority of foods, even when no bacon is indicated in the name. Eggnog – Nina New Zealand blue cheese and crackers – Johnny Bacon-wrapped scallops – Nina Bacon-wrapped jalapeño poppers – Cindy Green beans almandine – Ellen and Cindy Mashed potatoes – Morgan Chicken parmesan – Brian and Jim Pork loin roast (in a camp oven OMG) – Con Belle Dame (poached pears in chocolate) – Morgan I’ve included a picture of our main spread (minus Morgan’s impressive dessert), as well as some of our attempts at holiday decorations. Con thought to pack some tinsel garlands and flags (genius!) and we used aluminum foil to make a Christmas star, which we of course turned in to a meteor (I know some might say it was actually a comet, but whatever). All in all, a highly respectable effort that would not be out of place in an actual house rather than a campsite. Good show, team! Now it’s time to hit the hay before our potentially very long day tomorrow. Wish us luck, and watch the tracker to see if we’ve started heading south! share.delorme.com/NinaLanza 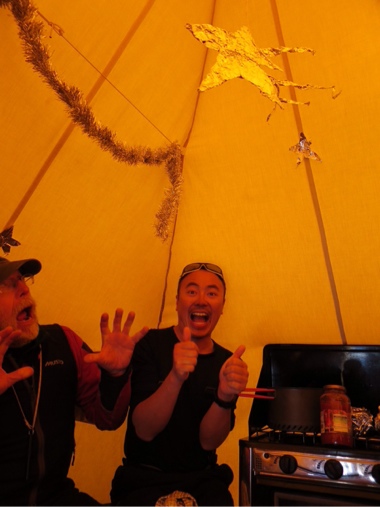 A Christmas meteor falls above dinner; Con is excited to recover it, while Johnny fears being struck.

Caption 1:  Caption 2: A Christmas meteor falls above dinner; Con is excited to recover it, while Johnny fears being struck.