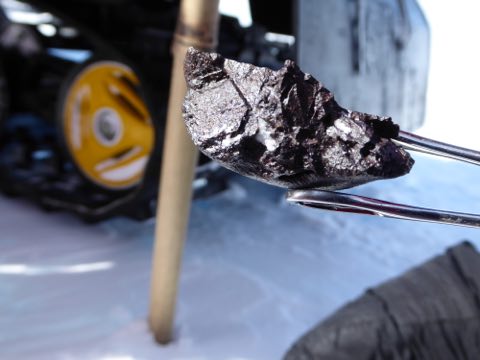 Ok, it’s getting a little ridiculous- we just can’t seem to get our last two put-in flights to come to EET! It was actually beautiful weather today; sunny, blue skies, low wind, but apparently there was some cloud deck between here and McMurdo that the pilots couldn’t fly through or around. Oh well, that allowed us to make a 10 mile round trip to the Meteorite City ice fields to the east of where we are camped. We stopped along the way to collect a few meteorites we had flagged, but also managed to find a few. In fact, we found an Iron meteorite, which is pretty cool because Irons are hard to come by in Antarctica. Out of the 21000 meteorites ANSMET has collected to date, they represent only about 1%. Irons are overrepresented for meteorite Finds from the rest of Earth- probably because they don’t look like other Earth rocks, they are chunks of solid iron and nickel metal. And truthfully they sometimes just look otherworldly, just Google some images of Sikhote Alin meteo rite and you’ll see what I mean. Anyway, Irons makeup about 5% of the world’s Falls (witnessed meteorite falls), so our collection of Irons from Antarctica is for sure lacking. Many have speculated that Iron meteorites sink down into the ice (instead of coming to the surface), owing to their high thermal conductivity. There was even a paper published last year speculating that there was a hidden “layer” of Iron meteorites just below the ice surface in Antarctica (I’d give you the reference but I don’t have internet at the moment- just type in “Iron meteorites and Antarctica and it should pop up)! Whatever the case is, this Iron made it to the ice surface and ANSMET has recovered it and will be bringing it home in a couple months or so! January 7, 2017 Jim Karner