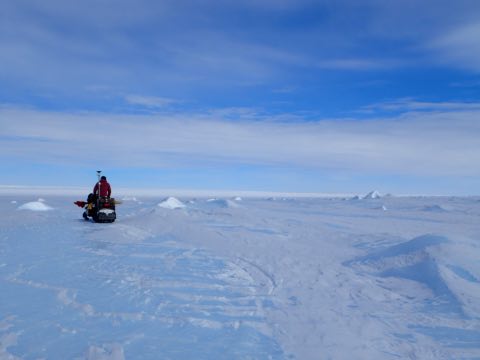 It’s felt like a regular season the last two days because we’ve been able to go out and search – not yet for a whole day, but at least for an afternoon, a morning and an afternoon! We are getting used to what cold weather clothing works for us to be out for several hours, like combinations of gloves, hats, socks, ski pants and coats, and we are rediscovering all the great field food. Having two squares of Cadbury’s milk chocolate broken off by gloved hand and shoved under goggles and ski mask into my mouth is like welcoming an old friend. And I just had my first meat stick in the field yesterday, snapped in half, bitten loudly and savored – well, that was more like welcoming back an old flame… 😉 We have traversed a great deal of the blue ice in Meteorite City, just east of our camp, and have found a couple dozen meteorites there! Many are small, but many are also very unique – see Jim’s post about the iron from yesterday. The landscape here is vast, undulating from topogra phy beneath us that we cannot see, and projects far off into the distance. Such wide open vistas that we get here on the plateau are breathtaking, and no matter how hard we try to capture it on camera, it never seems to work as well as our own eyes. There have been high, thin (and sometimes thick) clouds fairly persistently, so there are beautiful halos around the sun, like a big, round rainbow stretching across much of the sky and framing the sun. We also got to drive (and some of us ride – we are still missing two skidoos! But the riding is fun too) up onto some higher topography, where the ice is rushing relatively quickly over an underlying hill and is being stretched, torn, and broken across the top into deep crevasses and high pinnacles of ice. These are some of my favorite terrains to drive through, and sometimes we stop to gaze into the deep blue of a crevasse off of which we knock the snow bridge. It is in the pinnacles that we found a really interesting, shiny-skin ned meteorite yesterday, possibly an achondrite. This season has brought us our fair share of lemons, but we are making some serious lemonade. Maybe it’s Brazilian, since sweetened condensed milk is a big player out here in the field. But after yesterday and today, with the unique meteorites and growing numbers of them, the pinnacles, the chocolate and meat sticks, the drives across blue and white ice vistas, the solar halos, and the sled lashing (to bring back our fuel cache – I love that too), I think it’s limonada – best served in a blue-rimmed glass on the patio at Flavio’s in Rocky Point, Mexico, the sunset lingering over the flat, warm Gulf of California. The wind is freshening from directly south, maybe finally true katabatics to blow our snow away… And we are primary on our last two (incoming!) flights tomorrow. So it really is looking up! – Jani 8 January 2017