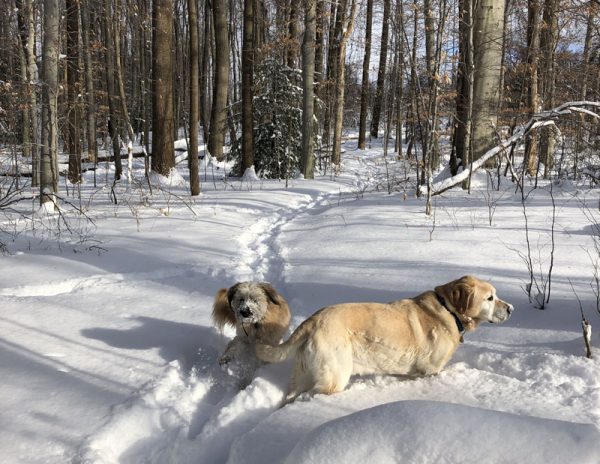 My dog team here in polar Novelty, OH. -7°F. Bentley the Fuzzbucket on the left, Apple on the right.

Hi everyone,  Just got off the phone after talking to John in McMurdo again, and thought you’d appreciate some updates.

Paul, Sheridan and Jim are scheduled to fly from McMurdo to Christchurch later today via C-17. Rumor has it Paul and Jim will both head straight home while Sheridan enjoys a little NZ sunshine with friends.  The Phoenix runway has reopened after some careful packing and rolling and colder weather (for you old farts,  Phoenix replaced Pegasus last season. And for the record, I don’t like the idea of an airfield named after flying things that burst into flame).  John and Brian have also wrapped up ANSMET’s end-of-season chores in McMurdo and are scheduled to fly to Christchurch tomorrow.  Why are all the seats available suddenly?  Turns out the yearly cargo ship that carries in supplies (and carries out cargo, such as our samples,  as well as recycling and refuse) showed up a wee bit late,  which means they’re still working hard to get the ship loaded/unloaded.  There were flights on the books to start sending home some of the crew in McMurdo that deals with the  ship,  but for obvious reasons they’re not ready to leave-  thus some increased availability of seats northbound.   Safe travels,  my friends!

I’ll close by noting that this may be our last post for the 2018-2019 season.  Sad as it sounds, it is clear (from the lack of posts if nothing else) that our field team has successfully transformed back into a bunch of individuals with free will, real lives and real commitments, winging their way homewards (or toward other adventures).  The basic story of the season has already been told;  an astonishing 865 meteorites, some amazing weather (both good and bad kinds), more outstanding support from our McMurdo friends,  and another season needed at Davis Ward. I promise to update you if anything changes- and if I can convince one or more of the field folks to offer  a personal post-season testimony,  you’ll see it here.

-sitting next to the wood stove in Novelty OH,  Ralph