The 2019-20 field season of the Antarctic Search for Meteorites project officially begins in less than 10 days, when our two mountaineers. John Schutt and Brian Rougeux, start the long journey south.   Once again our team consists of pretty much equal parts veterans and newbies.  In addition to our trusty field safety officers, vets will include myself (Jim Karner) as the science lead,  Cindy Evans (NASA JSC) and Marc Caffee (Purdue) both joining us for their second ANSMET seasons.  Newbies include Emilie Dunham, a freshly minted PhD from Arizona State; Lauren Angotti, who recently finished her Masters at Case Western Reserve University; Nicole Lunning, a Post-doc at Rutgers, and Alex Gerst, a current ESA astronaut from Germany.

During the 2019-2020 field season ANSMET will return to the icefields surrounding the Davis Nunataks and Mt. Ward (affectionately called “DW”).  The meteorites from this site bear the prefix DOM, a historical artifact linking them to the Dominion Range icefields to the north.   ANSMET has visited DW six times since the icefield’s discovery in the mid 80’s and spent last season (2018-19) there,  recovering  a whopping 865 meteorites, including seven pieces of a lunar breccia!

You can read more about last season in this blog, just click on one of the “archives” links on this page.  But to summarize,  a nasty early-season wind storm resulted in a phenomenal level of snow removal, and that in turn led to a very high rate of recovery of meteorites from areas we’d searched in previous years.  Near the end of the 2018-19 field season it was clear we could not finish our search efforts in the remaining time left;  that and the ability to cache a bunch of our supplies ( to lower logistical costs) led us to decide to go back to DW this season. 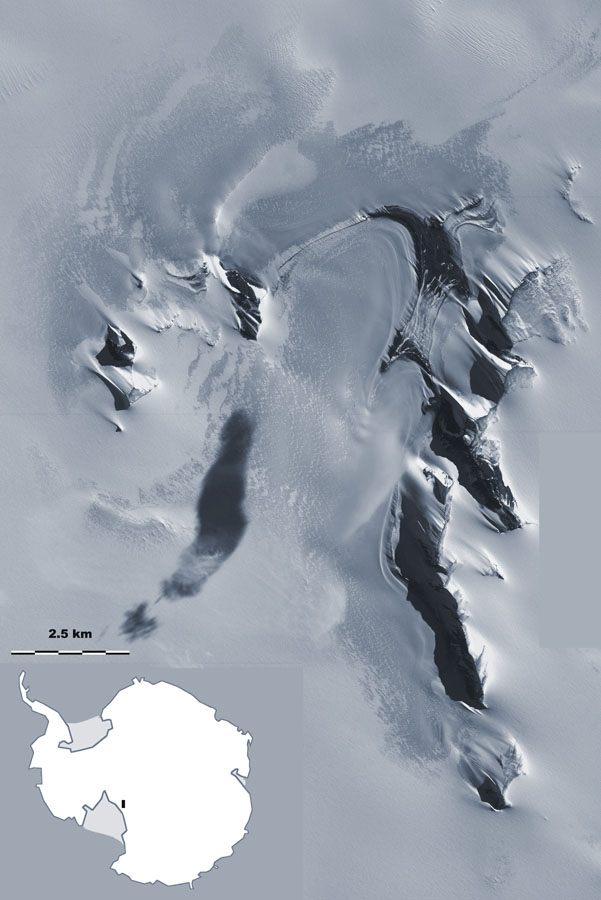 Satellite view of the Davis Ward icefields. Mt Ward is to the right and the Davis Nunataks are on the left; the large worm-lark dark spot on the left is the shadow of an orogenic cloud overing over Mt. Ward. This ice tongue, shaped a lot like Michigan’s lower peninsula, is surrounded by moraine on all but the southern, uphill side. All of those moraines have meteorites in them, sometimes in phenomenal concentrations approaching a few specimens per square meter.

About 20% of the bare ice at DW (at the northern end of the ice tongue) still needs systematic searching by snowmobile, and several areas of the moraines surrounding the ice tongue require systematic searching on foot.  Not to mention that last season we found several down-wind ice edges (newly exposed?) that have trapped lots of small terrestrial rocks as well as meteorites- we’ll be searching through those as well (see pic). 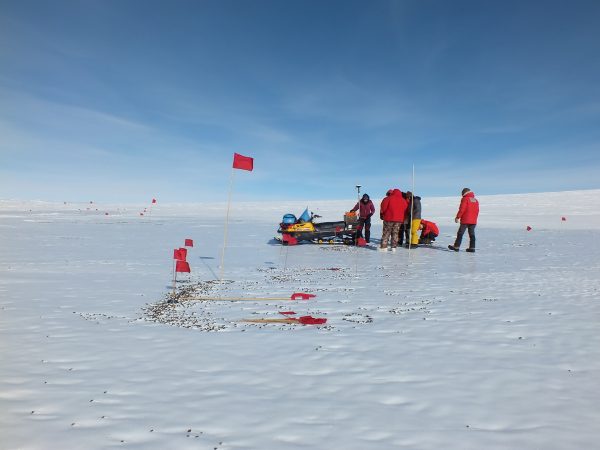 Our goal for the coming season is the same one we had last year;  to complete searching of these icefields and moraines.  But the program’s goal is to recover new meteorites specimens for the planetary materials community, so none of us are betting too much.  If we continue to find high concentrations of meteorites at DW, we’ll gladly stay and hunt!

-Jim Karner (with a few words from Ralph Harvey)