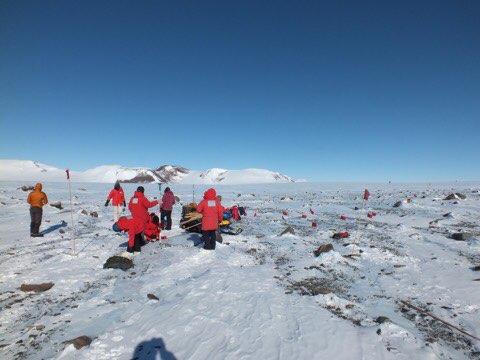 A portion of the “Klondike Beach” moraine area, and a feeding frenzy of meteorite finds. Each flag represents a meteorite found. Look at how close together they are!

The beginning of 2020 brought great weather for meteorite hunting to the Davis Ward ANSMET field camp. For the past 6 days, the skies have been clear, the temperatures mild (-5 to 5 degrees F) and the winds light, giving us the opportunity to engage in systematic searches on the blue ices of the Davis Ward “Big Tongue”, return to previously searched glacial moraines (“The Beach”) to find even more meteorites, and prospect on unexplored wind rows and moraine edges (piles of rocks carried by glaciers and deposited at their edges). The team has a new favorite area, unofficially nicknamed the “Klondike Beach” (inspired by Robert Service poems that we read each evening featuring characters and landscapes from the Alaskan gold rush). We have already identified dozens of meteorites at Klondike Beach, and we’ve barely started. Everywhere we look and every time we kneel down to take a closer look at a possible meteorite we find several more. It’s a meteorite rush!
This is my second ANSMET season – and the thrill of meteorite discovery never ends. The Davis Ward region has been explored by ANSMET field teams several times, as recently as last year. Each field season is carefully planned to complement earlier seasons, with a goal of systematically surveying the entire area. Several factors (weather and snow cover, for example) can throw wrinkles into field plans. But another element of field work that can result in rethinking of current or future ANSMET seasons is the unexpected discovery of new meteorite concentrations, like at Klondike Beach. This is why we explore. We’ll post more about our Klondike prospecting in a future blog.

Answer to the meteorWRONG blog: The meteorite is in the picture without the blue glove. It is located on the edge of the snow in the lower right area of the image. The left side of the meteorite is illuminated by the sun and the top left corner of the rock has some of the surficial fusion crust removed. Ask Ralph if you need more help identifying it!!