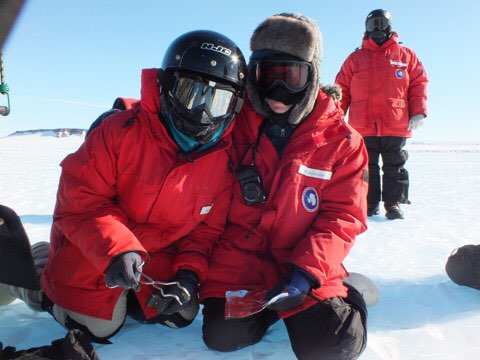 Nicole and Emilie with a carbonaceous chondrite.

Today, we found 25 meteorites! Most of them are similar looking, but a few stand out from the rest. In this blog, I will explain the different types of meteorites that we find in Antarctica, and all over Earth. There are two main types of meteorites, and it’s all about the heat, so let’s bake! One type is Solar System dust loosely stuck together and the other type has also been cooked and changed. I’m going to use a metaphor of making chocolate chip banana bread to explain these types, so stick with me (also this is something I’ve been craving while in the field…)!
Imagine that orbiting around the young Sun are chocolate chips, flour dust, banana slices, and some milk and egg liquids (the liquids are probably in the form of gas – it’s hot near the Sun!). A planet forms as it orbits the sun by material accumulating together, like the dust bunnies under your bed. This is like when you mix all the chocolate chip banana bread ingredients into a bowl and stir it a few times. All the ingredients are be pretty evenly mixed, but you can still distinguish them; chocolate chips, banana pieces, and bits of flour and egg. This is the end of the story for small Solar System bodies. They are unmelted accumulations of loosely cemented material, less that a few hundred kilometers diameter, or at least 100x smaller than Earth.
Larger Solar System bodies (imagine a giant batch of banana bread) are big enough to retain their heat, so go ahead and put your pan of banana bread batter into the oven. Once it’s done, you cut a slice. You can see that the heavy chocolate chips sank to the bottom, the other ingredients melted together, and the there is crust on the surface. Big melted bodies, like the Earth, in general have a core made of heavy iron, a mantle with a lighter composition, and a crust made of even lighter elements (like aluminum and silicon).
So, where do meteorites fit in with this story? Planetary bodies commonly break apart in space due to collisions, and some chunks happen to cross paths with Earth and land as meteorites (if they make it through the atmosphere). Meteorites from small bodies are called chondrites, we know this because we can see all the individual components mixed, but not melted, together like the banana bread batter uncooked. One of the main components is called a chondrule, a millimeter-scale melted droplet that resembles a marble. Ordinary chondrites are the most prevalent type of meteorite, making up about 80% of our collections. Another type of chondrite is the carbonaceous chondrite, they are similar to ordinary chondrites but have more primitive Solar System materials (we potentially found two today!). A third type of chondrite is enstatite chondrites; they are distinct because they formed in an environment with a small amount of oxygen.

Cindy with an ordinary chondrite.

Meteorites from larger, cooked bodies, are called achondrites (we think we found one today!). Meteorites that come from the Moon, Mars, and large asteroids, like 4Vesta, are achondrites because they are pieces of large bodies that have melted; they consist a core, mantle, and crust. Iron meteorites, composed of mostly iron and some nickel, are also achondrites, because they come from iron-nickel cores of these large bodies. Pallasites, containing metal from the core mixed with mantle material, are thought to come from the boundary between the core and the mantle of these large, melted bodies. Finally, there is group called primitive achondrites that come from a partly melted body, like if you take the banana bread out of the oven too early.

You’ve made it through the basics of meteorite classification! If you want to learn more, there are many websites or papers to read (Ralph do you mind linking one or two?  RPH- Don’t mind at all; see below). The meteoritic community organizes meteorites in this way because it helps us to determine where they come from in the Solar System – this allows us to better understand Solar System and planet formation. Although we mainly find ordinary chondrites here at Davis Ward (and everywhere on Earth), it is imperative to continue looking for meteorites; the more we have, the more rare and scientifically valuable samples we will find!!

-From Emilie, in the tent after finishing a long day of meteorite hunting in Davis Ward, Antarctica

from RPH:  As per Emilie’s request, some links to meteorite classification references.   One of the first reading assignments in my Planetary Materials course is an “oldy but goody” by Michael Weisberg, Tim McCoy and Sasha Krot entitled “Systematics and Evaluation of Meteorite Classification“.  The paper does a great job of portraying the basic elements of meteorite classification without falling too far down the rabbit hole of the explaining the relationships of the groups to solar system history and processes, which are too complex to deal with in any short form.

For those of you willing to go a little deeper, there are lots of choices- but let me selfishly recommend our book “35 Seasons of US Antarctic Meteorites: A Pictoral Guide to the Collection” (Righter, Corrigan, McCoy and Harvey, editors). Along with discussions of the history of ANSMET and how we do our work, there are chapters exploring how the various classes of meteorites influence our understanding of the primitive solar system, parent body processes, the Moon and Mars, and even some discussion of the specimens that don’t fit the canonical classification system very well.   There are also lots of pictures.   I can’t post the book online for you,  but I’m sure you can find it cheap somewhere (currently ranked an astonishing #2,415,736 on Amazon, #240 in the Comets, Meteors and Asteroids category).

Finally let me note that Meteoritics remains a fairly young science;  in any given year there are a bunch of specimens discovered that fit awkwardly among the existing classes and thus generate a lot of interest.   Historically I’d say Meteoritics sits about where biology sat 150 years ago, when a ship might come home to London  with an Onager or an Aye-Aye carcass on board and set the zoologists a-frenzy.  Here’s hoping this year’s ANSMET team comes back with a Platypus or two!

Oh, and Emilie.  Please don’t bake cookies with dust-bunnies in them.  Even for the deep field, that’s Ick.