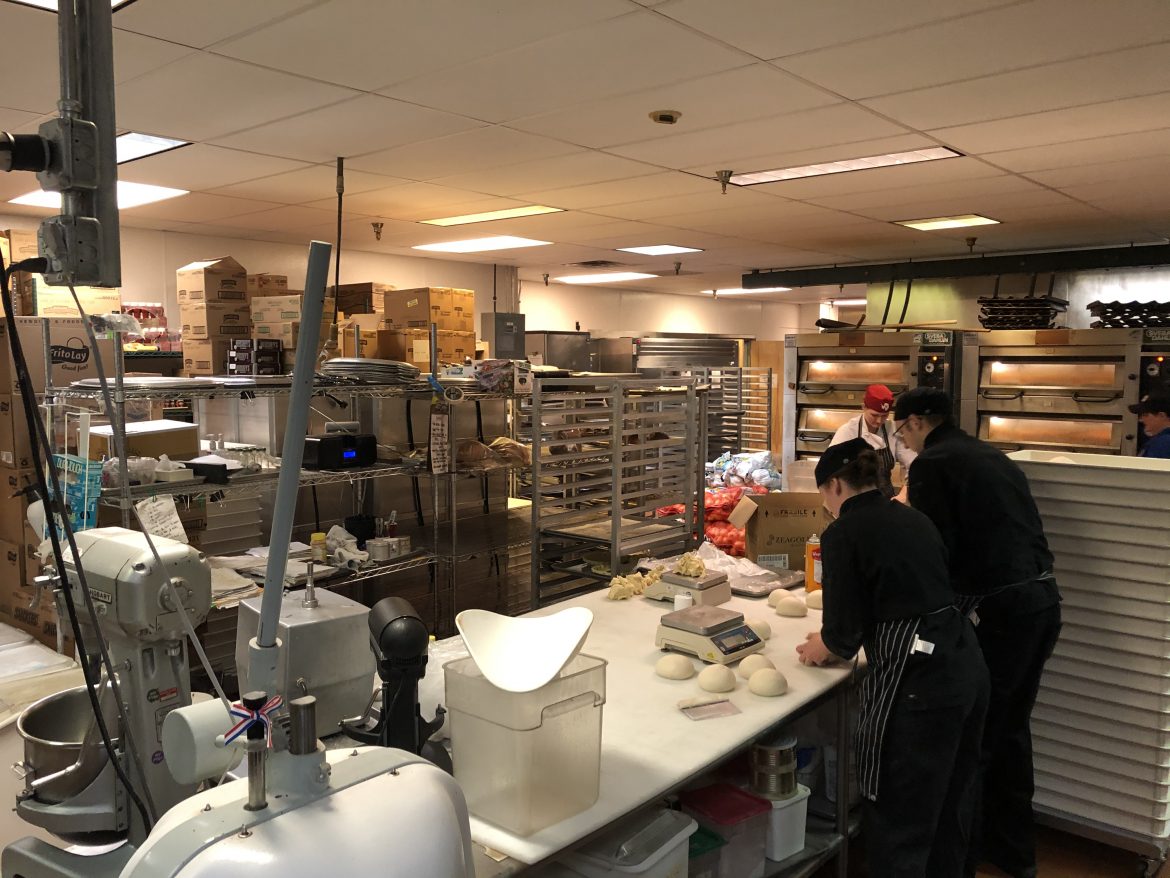 Part of the Galley kitchen; in the front pizza dough is being made. Each tray that is stacked on the right of the pizza workers is filled with dough. They go through the process of filling all those trays twice a day!

Well, we’re still here. The flight yesterday got cancelled and a C-130 did take off this afternoon, but Alex, Brian, and I weren’t on the manifest. The C-17 is expected to be back Friday, so as long as it makes it down here we should be on that flight.

To occupy our day today, some friends we’ve met took Alex and I on a tour of the Galley. We were able see the inner workings of the kitchen that serves 1200 people every meal of the day. I thought one of the coolest things to see were the giant pots that they use to make soups. They’re so large that at least a couple people could squeeze into them. The pots are heated by steam from the nearby boiler room, which we’re told gets the water to boiling temperature extremely fast.

Since getting back from the field, I have had McMurdo pizza almost every night, so naturally one of my favorite areas was where the pizzas are prepared. Pictured below are the two galley workers who make trays and trays of pizza dough every day to keep up with the pizza demand.

–  The ‘salad’ department mainly works with cheese. So unknowingly, I have been a very avid salad-eater while here =)
–  For the super bowl, the galley served a spread you’d see at most super bowl parties– jalapeno poppers, chicken wings, mozzarella sticks, and other deliciously unhealthy food. During that meal alone, the McMurdo community ate over 650 lbs of fried food!
–  All the food is ordered TWO YEARS in advance. I can’t imagine planning that far into the future.
–  Next to the frozen yogurt machine (the Frosty Boy), there are these little mint chocolate chips to use as an ice cream topping. If the current consumption rate continues, McMurdo has enough mint chocolate chips for 42 years! Planning may not have been successful for that item… 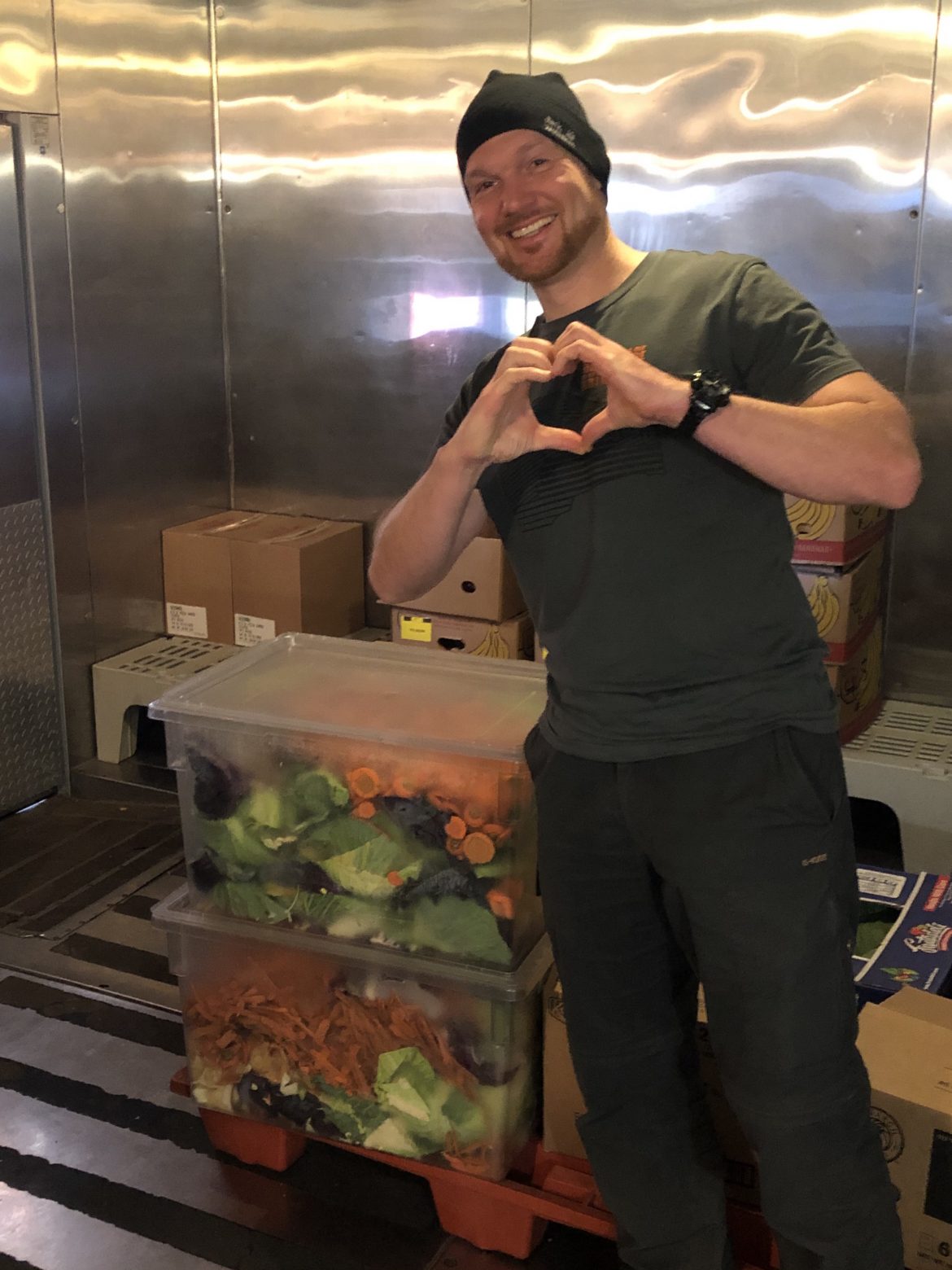 Alex inside the ‘freshies’ cooler. He has been craving salad since we left Christchurch, and just about lit up that he could even look at some fresh lettuce and carrots.

Overall, I really enjoyed seeing the Galley’s working parts and meeting more of the people that help McMurdo run smoothly. Another part of McMurdo life besides eating in the Galley for every meal, is the opportunity to attend a Science Talk every Sunday or Wednesday evening. So far we’ve learned about the Rapid Access Ice Drill (RAID)  , Ice Fin, the 88-South Traverse, and the McMurdo Dry Valleys. It has been fascinating hearing the variety of projects happening on the continent and the different contributions they’re making to science. links embedded for those who are interested in learning more! 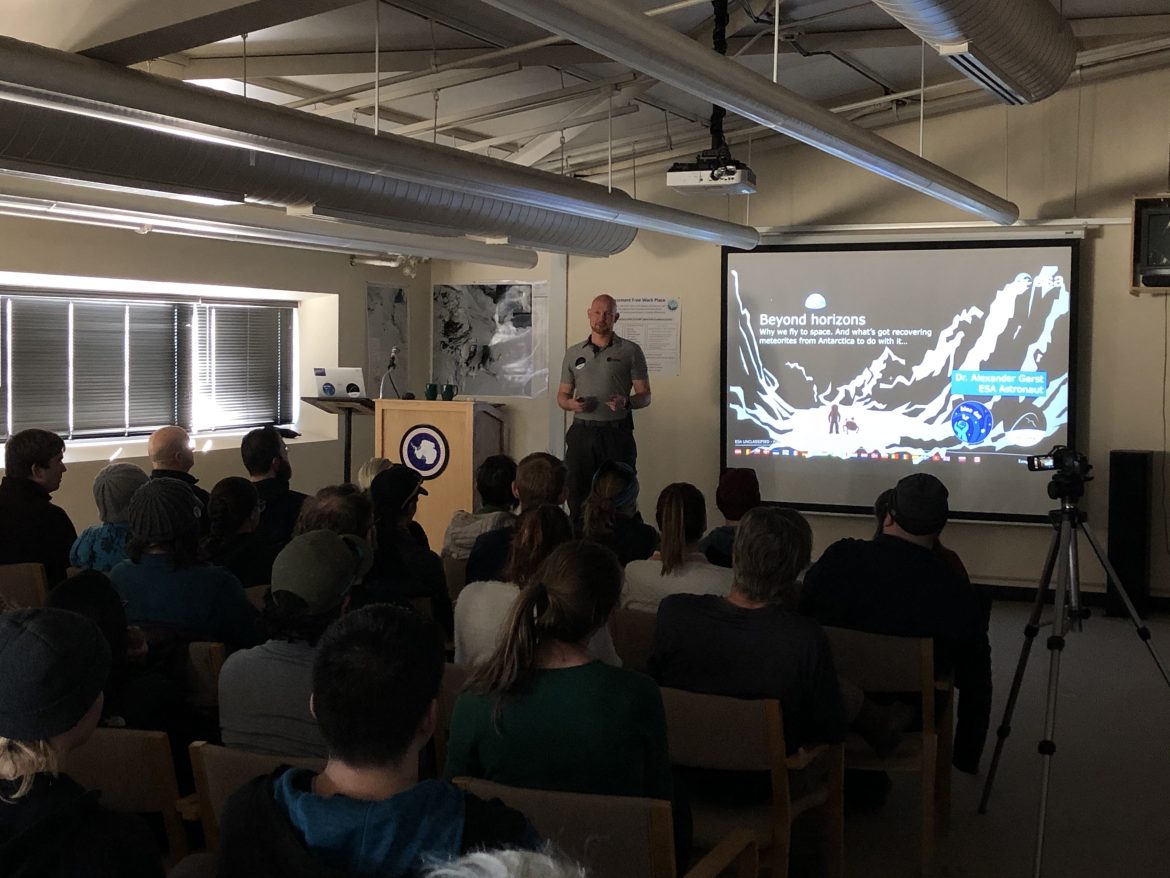 Alex giving his Wednesday Science Talk in the Crary Library, titled ‘Beyond Horizons’.

A silver lining of us being trapped here, is that Alex was asked to give the Science Talk tonight. It was phenomenal hearing his experience in space and the comparisons to ANSMET. An interesting tidbit learned was that he actually became seriously interested in becoming an astronaut after hearing a Science Talk about space suits during his first trip down in McMurdo. He mentioned how fulfilling it was to now have travelled to space and to come back to give a talk that hopefully would inspire some scientists from the crowd to pursue their dreams of space flight just as he did.

-Posted by Lauren, after a full day of activities in sunny McMurdo.