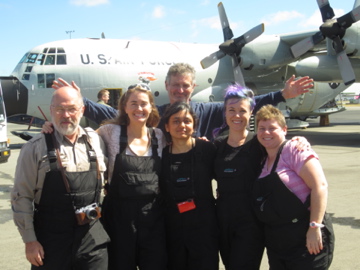 Getting underway and going nowhere….

Hi all,   Last night I posted that it seemed like the team was underway, and they were-  sort of.  In fact they got on the plane multiple times, flew part way, and then came home. In the local idiom it’s called a “Boomerang” flight, and it’s a fairly common occurrence. In simple terms, if you’re flying 3000 miles with nothing but cold Southern Ocean below you, and one rinky-dink airport,  you want everything perfect.  I for one am glad our pilots (in this case the NY Air National Guard) are pi-i-i-icky!

But let’s let Morgan and Jani tell the story, shall we?

Hey Ralph,  Here’s a picture we snapped in front of the LC130 we were hoping to take to the ice today. We got kitted out in all our ECW gear, were briefed on some important safety and environmental considerations and were promptly loaded onto the plane. Then we waited. Then we found out there were issues with the radar so we needed to disembark while they were worked on. A few hours went by, we were given the go ahead to load up again, which we did. After a wee taxi around the airfield, it was decided we would need more fuel and it was already late in the day (~3:30PM) so it would be better to wait until tomorrow to try again. Alas, we are all craving ice and anxious to get out there and find some rocks. The good news is that we are well practiced in donning (and removing, on the airfield, much to the dismay of the Air Force personnel) our ECW gear now! We were also issued so many sandwiches today we didn’t know what to do with them all – a delicious problem to be sure! We are scheduled for a 7AM departure tomorrow so send us some clear weather vibes – we’re getting sick of all this warm weather!! ;o)

Hi Ralph,
We got on the plane, got off the plane while they worked on the RADAR, waited on the tarmac (and got to take pictures, which was fun), got sunburned, then went to the local pax terminal for a few hours while they worked on the RADAR. At 2:30 we got back on the plane, taxied all the way to the runway, then came back. At that point, the weather had worsened in McMurdo to the point that we didn’t have enough fuel, and if we’d stopped at Invercargill as planned (to get more fuel, to enable the carriage of the extra cargo we had on board), then we’d have run out of crew time.

In short, we’re boomeranged until tomorrow morning. 🙂 The plane is fine, so all seems to depend on weather.

I’m glad for a run in the park. Spirits are fairly high. Hasta pronto!

Two additional notes from the editor:

-You say the sandwiches are yummy?   I think thou must be under the influence of mood altering substances, young lady.  Catering is NOT a tradition in USAP.

-for the families out there-  sometimes when boomerangs are frequent, those at home start to have visions about aged aircraft with too many problems.  You shouldn’t worry; this is probably the single safest fleet of aircraft in the world.  The C-130 platform is probably the single most successful aircraft ever built, with many thousands flying around the world and rivalling the DC-3 family for longevity and durability.  Originally a military aircraft, they have a super-strong airframe and huge redundancy in all their systems (four engines, a dozen separate fuel paths, and I believe 1,345 different radios).  On top of that, the USAP LC-130’s  are maintained and checked out at a level far, far beyond any aircraft flying back in the civilized world, and the pilots from the NYANG are the best trained and least cowboyish in the world. They simply don’t fly unless every system works and everyone on the crew agrees it’s safe.   As someone with nearly 1000 hours on these beasts (a lot of it working with the crews),  I worry a lot more about a commercial puddle-jumper flight between Cleveland and Washington DC than I do about the flight to Antarctica.