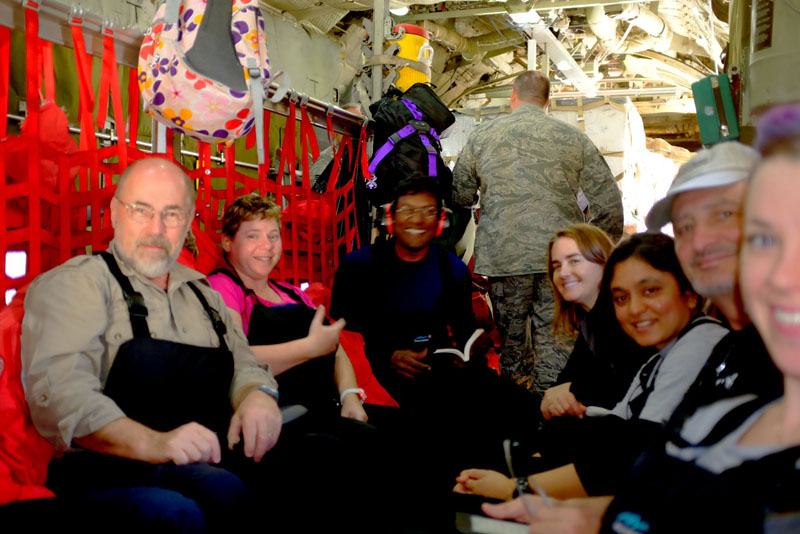 From Barb:   We had some engine problems this morning and are back in the pax terminal. We will try again for a 12 noon flight. if that doesn’t go by 12:30 pm then crew time expires. Hopefully you won’t be hearing from us this evening (emoticon deleted)

From Barb (a little later):       They just canceled the flight for today because of the ongoing engine repairs. They don’t think they can get out before the crew expires today. We’re back to CHC and will try again tomorrow!

From Jani (a little later):      And….. we’re boomeranged. I’m guessing they figured they’d run into crew time at 12:30 before they got it fixed.  Back to Christchurch!

Two boomerangs is not unusual, and maybe third time’s a charm.  The gang does have some chores to do while they wait.  One McMurdo task that takes a lot of time is grocery-shopping;  or more properly, deciding on the food you want for the season, pulling it from shelves and freezers,  and packing it properly.  Jim sent the latest list of available stuff to the team back in Christchurch and asked them to prepare their menu and shopping list, so that the delays getting to McMurdo don’t propagate too far.  In the compressed pre-season we considered doing this,  and even possibly pulling food before they get to McMurdo.  A little risky, particularly if Jim and John decide you like stewed spinach,  but in this season it is the kind of compromise we may be stuck with.

-From Ralph in Cleveland