It’s nice to have opportunities to see and do things you didn’t think you
had time for, especially when you’re in as unique a place as McMurdo
station, Antarctica. At least that’s what we tell ourselves when we’re
faced with more delays! Minako, Brian and I were bumped from the flight on
Monday, but luckily Jim and Alex made it out and are probably home now. So
that night, I decided to ski to Castle Rock, which has long been on my
list, but that I’d never found time for. It’s about 10 km round trip, is
across a nice, wide snow field that approaches Mount Erebus, and has a
gentle rise on the way out. The day was so clear that we had amazing views
of the volcanoes Erebus, Terror, the two islands out in the sound, and
even Cape Evans and possibly Cape Royds in the far distance. We dropped
our skis and scrambled up to the top of Castle Rock for even better views
and the chance to sit on a warm(ish) rock. With a low sun, I had to remind
myself that we didn’t have to hurry home before the sun would set (my
friend said we’d have some pretty big problems if we arrived that late!).
Returning home from a nice evening ski at 11:45 pm with the sun still well
up was a treat.

We’ve also been doing some volunteering around town, to help out the
people who have worked so hard to get us into the field. My favorite place
to do this is in the BFC, preferably around the food! But I also love
helping put away or sort through all the field gear. And then there are
movies, eating, talking with the interesting people around town, more
eating… ok, maybe it’s time we got going from here. We will likely fly
home on a C17 aircraft, which means the flight time is only about 5 hours
instead of 8 on the LC130. But the rumor mill (which turns out to be valid
nearly 100% of the time around here) has said the runway is not yet cold
enough – so we may still have a little bit of a wait. This is NOT a
picture of the runway – the sea ice has broken up around the edges,
allowing more seals, and we were hoping for penguins but not yet, to come
up and lounge on the ice. And the cargo ship comes in just a few hours, I
saw it from the beautiful, black-and-white terrain of Arrival Heights, so
the town’s all abuzz. It will be fun to see how things change when you add
about 1/4 more people and stuff to town! But I will also start thinking
about which trees I’ll hug first when we finally get to fly north. 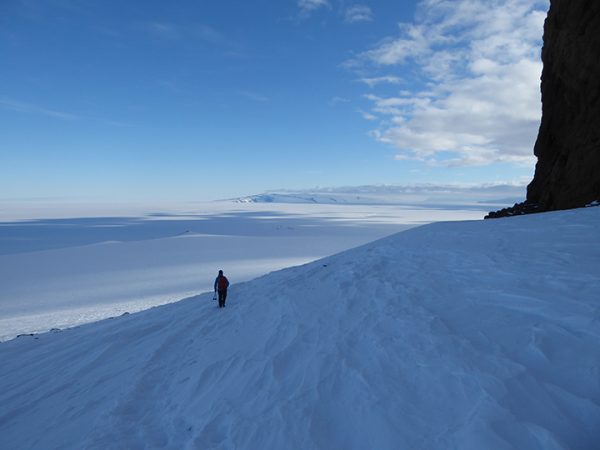 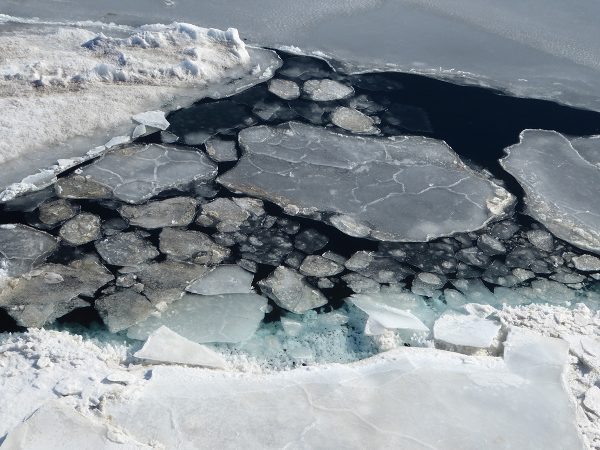