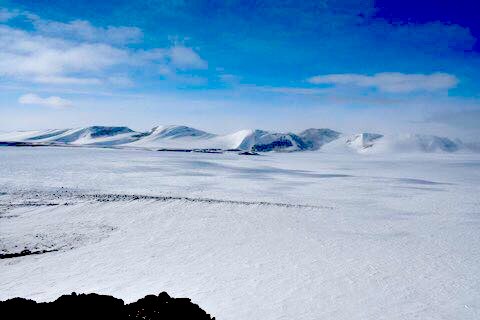 In this image, blue ice can be distinguished, on the left, from snow-covered glacial ice, on the right. An ice-core moraine runs horizontally across this Davis Ward landscape. We will show more pictures of blue ice in future blogs (image color-corrected by rph. View is toward ENE from the top of the northern Davis Nunataks).

ANSMET searches for meteorites are always associated with blue ice. Ice is an amazingly transformable substance. If you make it in your freezer at home, it is white and brittle. But if you take a lot of it and stack it up hundreds of feet thick, as a glacier, it all if a sudden behaves like a slowly moving liquid. Most glaciers appear white, because they are covered by snow. But on areas where the wind blows the snow away, the pure, dense ice actually appears blue – somewhat similar to the optical effect that makes the sky blue. This is what we call “blue ice”. In Antarctica blue ice is found in areas in which the loss of ice mass outpaces deposition. Blue ice areas are typically found next to mountainous areas, where the scouring effects of the katabatic winds (winds from the pole) are the greatest. Meteorites entombed in the glacial ice are revealed when the ice above them is scoured away by the winds. These blue ice meteorite stranding areas have yielded thousands of meteorites over the years.
These blue ice areas are complex glaciological features in their own right. In many of the areas where we search for meteorites these blue ice glaciers collide with each other. They may have different flow velocities, or it may be the case that moving ice is colliding with a dead ice area; dead ice is ice that has stopped moving and sometimes is stopped by mountain front. The collision of two ice fields may produce an ice-cored moraine; a moraine with a core of blue ice but covered with a veneer of sand, pebbles, cobbles, and even large boulders. This material is conveyed to the surface from the bedrock underneath the glacier along the shear zone between the two glaciers. These moraines may be rather subdued, almost level with the blue ice field, or they may stand meters in relief. The blue ice-cored moraines in the Davis Ward area are up to 5 meters in height and extend for kilometers, so they are a significant feature in this landscape.
These blue ice moraines harbor many meteorites; in the Davis Ward nunatak area the moraines contain far more meteorites than are found on the blue ice itself. Why? We don’t have a full understanding of this but the katabatic winds play a role. These winds are capable of moving small cobbles considerable distances given many years. As the winds push the meteorites downwind many eventually run into a blue ice-cored moraine. The sand, pebbles, and assorted cobbles of the blue ice moraine effectively catch the meteorites. So mixed in among all the terrestrial (Earth) rocks are meteorites. The meteorites are distinguishable, but only with careful inspection; most of the terrestrial rocks in these moraines are dark and polished from the wind. ANSMET team members spend many hours in these moraines, much of it on their hands and knees, trying to identify the distinguishing characteristics of meteorites among the thousands of like-sized terrestrial pebbles and cobbles. It is a labor of love!
Although sorting out the meteorites from the terrestrial rocks is labor-intensive the meteorites associated with blue ice moraines may yield scientific information not attainable with those found on blue ice stranding areas. The blue ice-cored moraines themselves contain chronological information about ice flow which researchers are trying to harvest. In the future it may be possible to combine blue ice moraine chronologies with meteorite terrestrial ages to learn more about the complicated dynamics of ice flow, which in turn may provide information about Antarctic climate history during the past 2 million years.