[INTRO] The field of catalysis is important for everyone for very many reasons. Catalysis involves, in simple terms, concerns the conversion of one form of matter to another through the use of a substance that is not involved in change and can be used in small amounts. Consider the many different types of plastics that are present in all of the products we use everyday. Most of these are produced from small molecules present, or derived from, oil we pump from the ground. Whether the process yields a soft or hard plastic depends on the chemical nature of the catalyst used. Catalysts are also are being studied to provide economical ways to convert underutilized fuels such as methane gas to more transportation friendly methanol. Catalysts also provide many of the drugs and drug intermediates that are needed to cure, prevent, and treat many diseases. Many new drugs require development of new catalysts for their discovery and to make them affordable for patients. Catalysts are also an essential part of the campaign to make the chemical industry greener and more environmentally friendly. Specifically, optimal catalysts will be able to produce a desired chemical commodity in high yield with little or no toxic byproducts, operate in safe on non-volatile media (good for the environment) and do so at ambient temperatures and pressures (low energy footprint or need). Many catalysts are based on inorganic compounds and complexes. [/INTRO]

[Our Research Strategy]  Iodosylbenzene, (PhI=O)n, and (Tosyliminoiodo)benzene, (PhI=NTs)n, are two important sources of oxygen atoms and tosylimino groups for transition metal catalyzed processes such as epoxidation and aziridination.   Mechanistic studies of the catalytic reactions are often impeded by the heterogeneous nature of the reaction medium.   We have designed new reagents (JACS 1999, Angew. Chem. 2000) that incorporate intramolecular secondary bonds (analogues of hydrogen bonds that involve heavy atoms) between iodine and oxygen atoms (below). These newly developed species display unprecedented solubility in conventional organic solvents and allow for standard spectroscopic measurements (see Coord. Chem Rev. 2014 for recent review of our work and related efforts). These new organoiodine(III) reagents will thus allow us and others to fully maximize the potential of transition metal catalyzed atom and group transfer reactions (Topics In Current Chemistry, 2015).  We are also interested in using I•••O secondary bonding to rationally control supramolecular aggregation in the solid state (Inorg. Chem. 2021, ARKIVOC 2021, Chem. Commun. 2022). 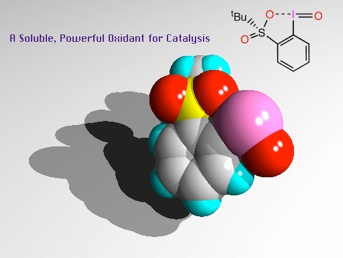 Specific Project (b) New Ligands for Catalysis based on meta-Terphenyls